Better than a thousand verses made up of useless wordsis a soothing single line that soothes one. (Thera, 96)Hong Kong is one of the busiest and..

Better than a thousand verses made up of useless words
is a soothing single line that soothes one. (Thera, 96)

Hong Kong is one of the busiest and most densely populated cities in the world. Seemingly preoccupied with work and endless distractions, its residents have little time to stand up and stare. But despite the hustle and bustle, many Hong Kong residents somehow find time to study and practice Buddhism. While most are more familiar with the Buddhist traditions of Mahayana and Vajrayana, there is another one that has taken root in the city and caught their attention – Theravada Buddhism.

In modern times, Theravada Buddhism first caught the attention of Hong Kongers in the 1970s through the efforts of the Hong Kong Buddhist Sangha Association under the direction of Venerable Sik Sai Chan. But it wasn’t until the introduction of his meditative practices in the 1990s that people began to take a serious interest in the Theravada teachings. We have seen encouraging growth since then, although it remains a minority tradition practiced mainly by immigrants to Hong Kong from predominantly Theravada countries such as Myanmar, Sri Lanka and Thailand. Interestingly, we are also seeing interest from a growing number of local Hong Kong residents.

One of the first institutions to promote the systematic study of Theravada Buddhism in Hong Kong was the University of Hong Kong’s Center of Buddhist Studies (CBS), founded in 2000, through its nonsectarian approach to Buddhist studies. * Ob Lay or monk, the students accepted by the CBS for the master’s course are taught systematically and academically in all Buddhist traditions – Theravada, Mahayana and Vajrayana – by highly qualified lecturers and world-renowned Buddhist professors. When I was doing my Masters at CBS in 2013, I was pleasantly surprised to find many lay students devoted to Buddhism. In fact, this was the first time in a course I took that lay students outnumbered monks.

Every year hundreds of students apply to the CBS to take the Buddhist Studies MA program, but it is the monastic students in their yellow, saffron, or gray robes that draw the attention of local and international students on campus . Many HKU students found it strange at first to see monks among themselves. For example, when a group of us was going to lunch, a student came running up and asked if we were also students at the university. Now, however, monks have become a pretty common sight on campus.

Outside of CBS, several prominent monks have also been instrumental in the rise of Theravada Buddhism in Hong Kong. One of them is the Venerable Dr. Dhammapala, a Theravada monk from Malaysia. After completing his doctorate at HKU, he worked as editor-in-chief and spiritual director of Buddhistdoor Global. ** There he taught courses in Theravada Buddhism and conducted religious ceremonies for devotees. He also took HKU students and alumni to visit the four most important sites for Buddhists: Lumbini in Nepal and Bodh Gaya, Sarnath and Kushinagar in India. Through these efforts, Ven. Dhammapala has helped Buddhists increase their understanding and attracted new followers. After retiring from Buddhistdoor, Ven. Dhammapala returned to Malaysia although he has since returned to Hong Kong to set up the Mindfulness Center.

Another monk who has done much to promote the Theravada tradition is Ajahn Brahm, a well-known monk and teacher. He comes to Hong Kong every year to organize retreats and Dhamma talks, which are very popular with many devotees. A charismatic speaker and practitioner, he has drawn many newcomers to Theravada Buddhism from Hong Kong and elsewhere. Ajahn Brahm’s oldest disciple, Ajahn Brahmali, also visits Hong Kong annually for sutta and meditation retreats. *** After studying at Bodhiyana Monastery in Australia, after hearing the Dhamma teachings of Ajahn Brahma, he became an exceptional student who mastered the Pali language and the suttas.

We couldn’t discuss Theravada Buddhism without mentioning Ven. Extensive contribution from Prof. KL Dhammmajoti. A learned scholar and practitioner, he taught at CBS for 12 years. His profound knowledge of Theravada and Mahayana Buddhism – there are few scholars who can successfully bridge both traditions – has secured a following among his former students. After retiring from HKU in 2014, Ven. Dhammajoti continued to spread Buddhism by opening the Aloka Vihara in an apartment offered by a devout follower (upasika), where he performed weekly Pali devotional chants for lay people. To ensure that the devotees understand what they are singing, Venerable Dhammajoti will patiently explain the meanings of the Pali words one by one. He always enjoys hearing his followers share that they have found peace of mind through these chanting sessions.

As interest in Theravada Buddhism grew, Ven. Dhammajoti decided to open the Buddha Dharma Center in Hong Kong to enable non-sectarian academic study of Buddhism with an MA program first in English and later in Chinese under the auspices of Kelaniya University, a prestigious Buddhist university Sri Lankas, offers. As the director of the Buddha Dharma Center, Ven. Dhammajoti aims to promote Buddhism through a systematic and holistic approach, and firmly believes that faith and intellectual study must be integrated if devotees are to truly understand Buddhism. 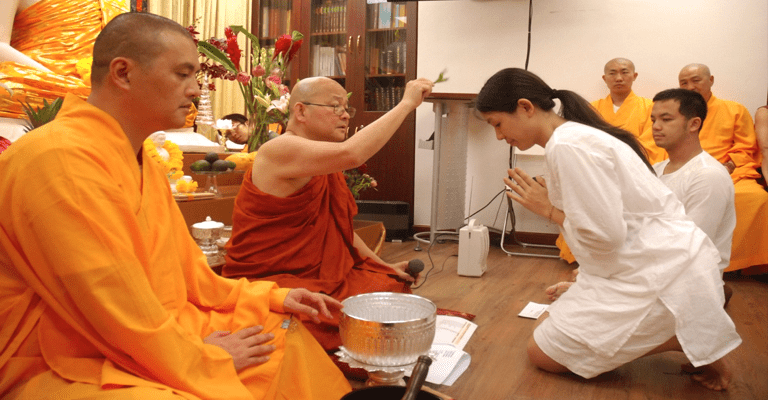 Venerable Prof. KL Dhammajoti sprays blessed water on the head of a new Upasika who has sought refuge. 2015. Image courtesy of Sara Li

Venerable Dhammajoti constantly insists that his view is nonsectarian, but believes that in order for a nonsectarian approach to make any sense, Buddhists must first develop an objective historical perspective of the Buddha’s teachings. He has spoken on several occasions about the need to sincerely find out what he calls “archaic Buddhism” rather than Theravada or any other “Vada”. Venerable Dhammajoti makes it clear that he emphasizes the early Buddhist teachings by promoting the awareness that all Buddhist teachings ultimately have their roots in Indian Buddhism, which is comparatively best preserved in the Pali and Agama scriptures.

A similarly committed point of view was taken by the modern Chinese scholar and monk Ven. Yin Shun, who for years studied the Chinese Agama Doctrines as well as the Pali Texts (through Japanese translations) and has published influential scientific works including: An Introduction to the Buddha Dharma (an exposition of the early Buddhist teachings) and The Compilation of the primitive Buddhist canons. Rev. Yin Shun’s emphasis through these works on the need to return to Indian Buddhism has inspired many young Chinese Buddhist readers. From this perspective, he is also to be highlighted as a modern teacher who was instrumental in the study and practice of early Buddhism among Chinese Buddhist intellectuals, including Hong Kongers.

Another who has helped promote the Theravada faith is CBS graduate Sigiriye Sumiththa Thero. In 2016, he founded the Sri Lanka Buddhist Culture Center in Hong Kong to provide a temple for the Sri Lankan Buddhist community to practice. 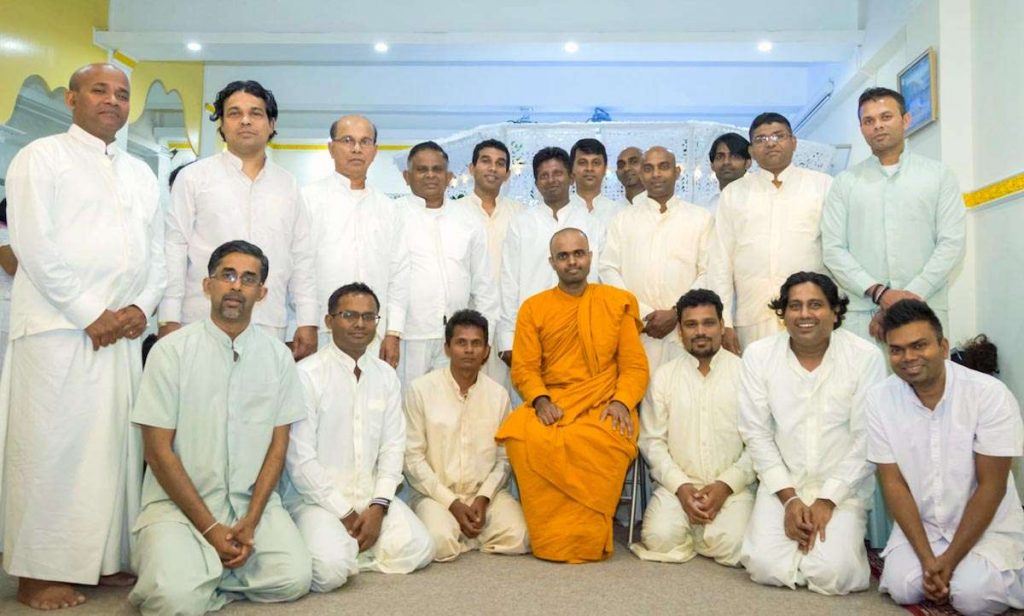 Practitioners at the Center for Buddhist Culture in Sri Lanka after a full night of pirith (Pali: paritta) chanting alms offerings

Although the Theravada tradition is not yet firmly anchored in Hong Kong, its number is growing. Both lay people and monastic groups have established several small meditation centers in Hong Kong. The Dhamma Muttā Center, for example, was founded on Lantau Island in 1991 so that people could practice Vipassana meditation according to SN Goenka. Another center, the Hong Kong Insight Meditation Society, was founded by a group of lay Buddhist people. U Sasana, a venerable Myanmar monk who has lived in Hong Kong for more than 20 years, has opened a center called Sasana Yanthi in Tsim Sha Tsui for those interested in Theravada meditation and practices. Myanmar’s Consul General Zaw Zaw Soe has also helped promote Buddhism by enabling people to celebrate Buddhist festivals in his office. 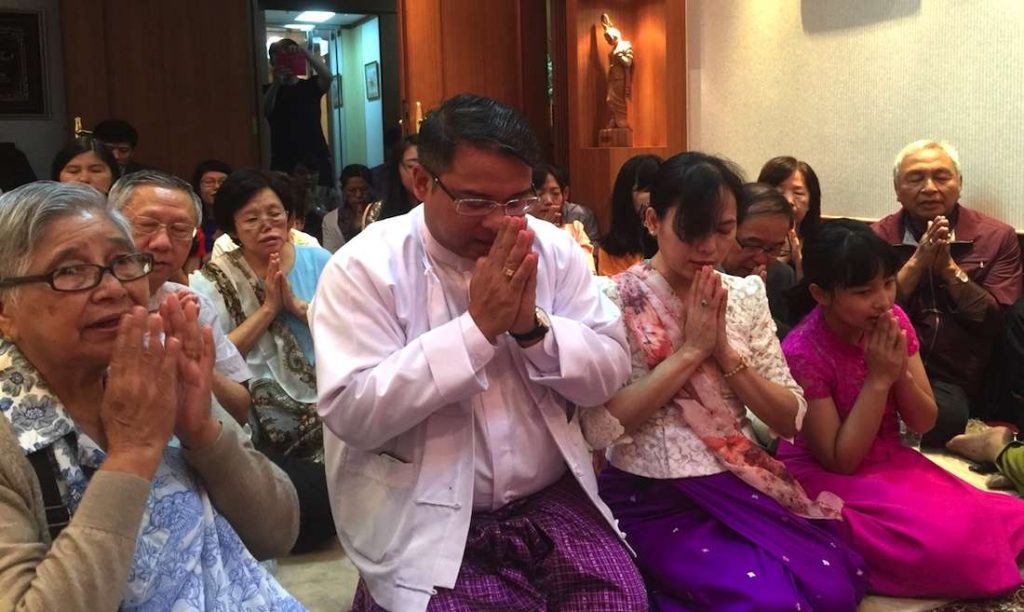 Front: The Ambassador of Myanmar, his family and guests listen to a Dhamma discussion during the Myanmar New Year celebrations. 2017. Photo by Ven. Nagasen Sraman

Also noteworthy among Hong Kong’s overseas community is that Thai Buddhists have more temples than any other minority group. Among them is Wat Tai Wo, also known as Wat Methumvanaram, in the Tai Po district, which is known for its beautiful, green forest landscape. ****

It should be remembered that the worldwide growth of Buddhism is made possible by the diversity and richness of its traditions – Mahayana, Theravada and Vajrayana. In order not to forget, we should be reminded that the underlying common goal – liberation from suffering – is the same despite different form or tradition. When practicing Buddhism, we should try to forget about nationality and cultural prejudice; If we manage to break down such barriers, we can effectively learn to gradually shed our ego.

In summary, we can say that the monks and lay people who study and practice the early Buddhist teachings play a role in spreading Theravada Buddhism in Hong Kong through academic institutions and Buddhist centers. The Buddha said, “The water pot is filled drop by drop” ***** and small efforts by Buddhists will also facilitate the spread of Theravada Buddhism in Hong Kong.

Thera, Narada. 1993. The Dhammapada: Pāli text and translation with short stories and annotations. 4th ed. Taipei: The body of the Buddha Educational Foundation.

Preserving and protecting the Buddhist heritage of Laos
The five spiritual obstacles
When Catholics come forward: Perspectives from the Order of the Discalced Carmelites on dialogues with Buddhists 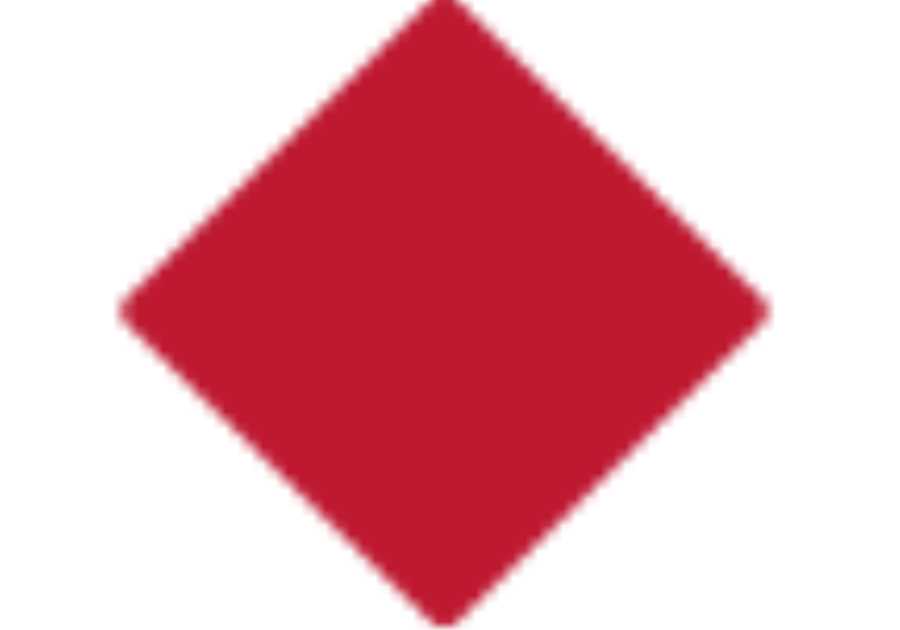 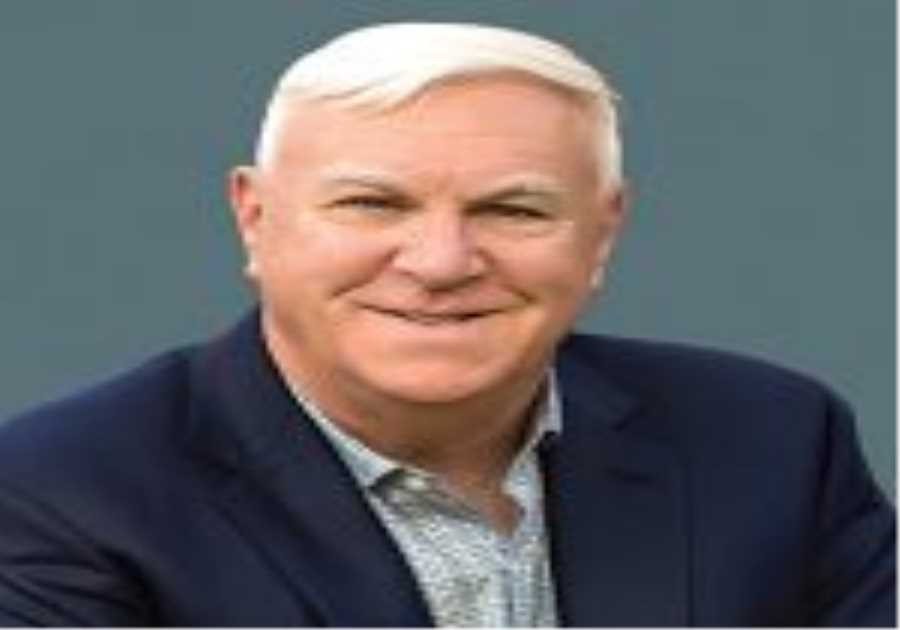 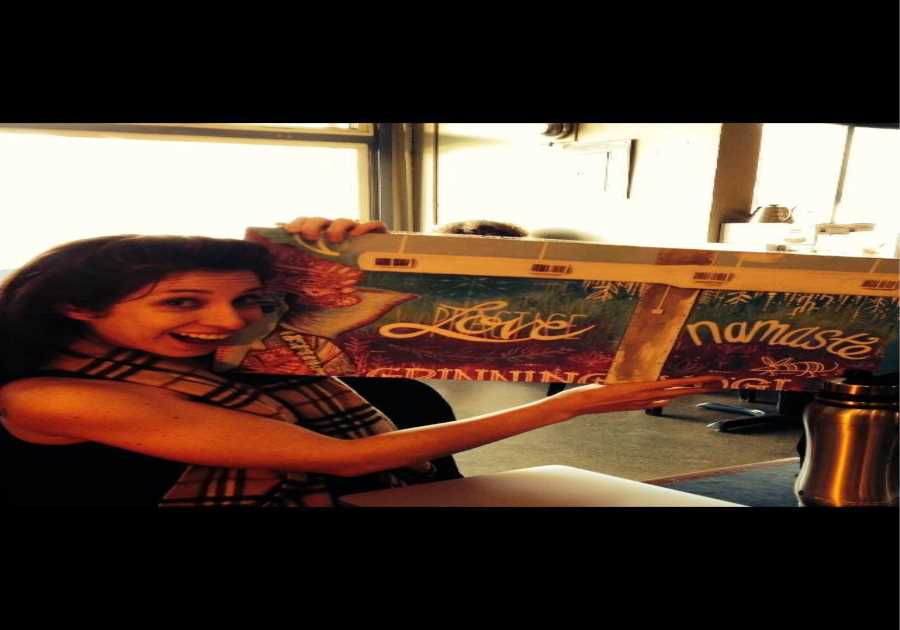 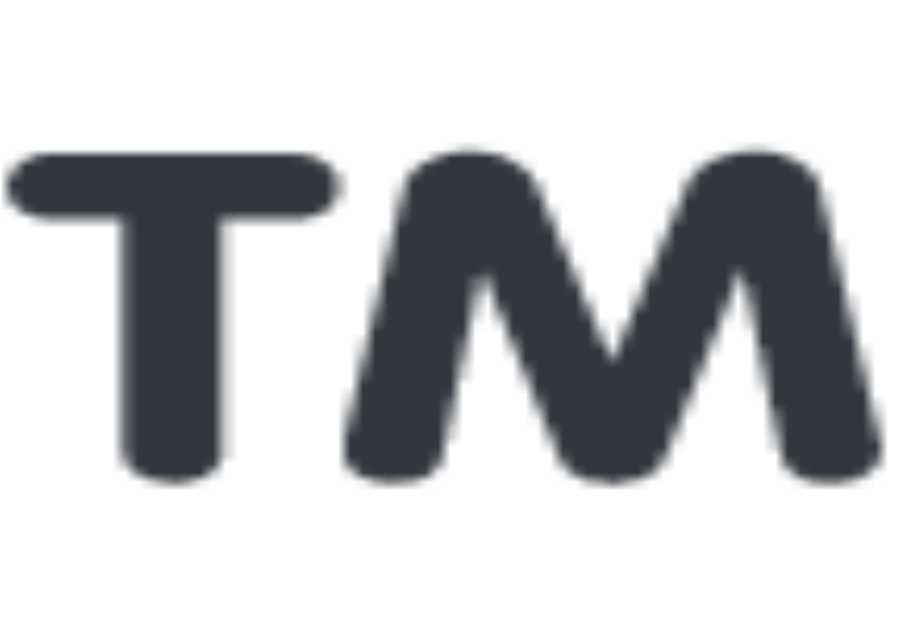 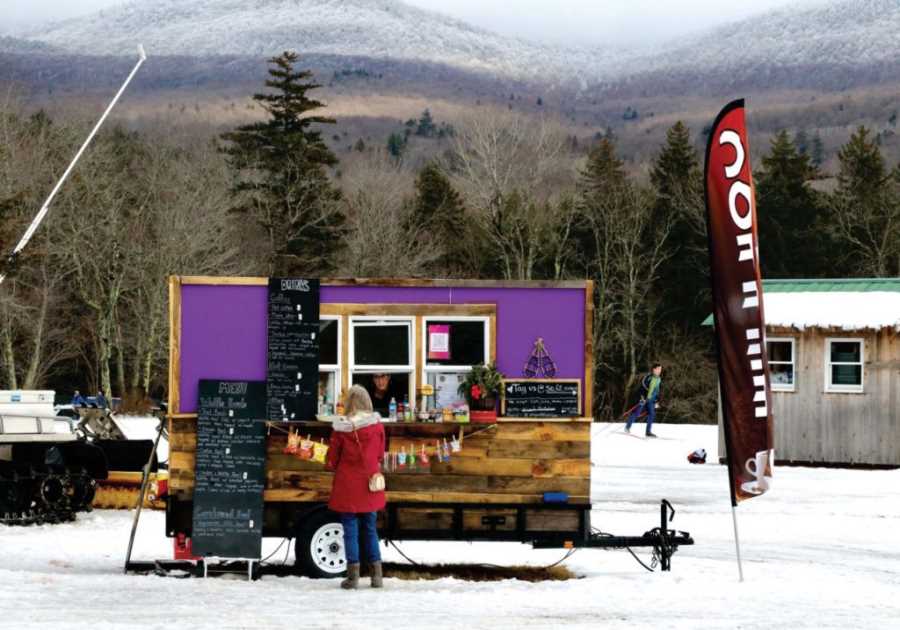 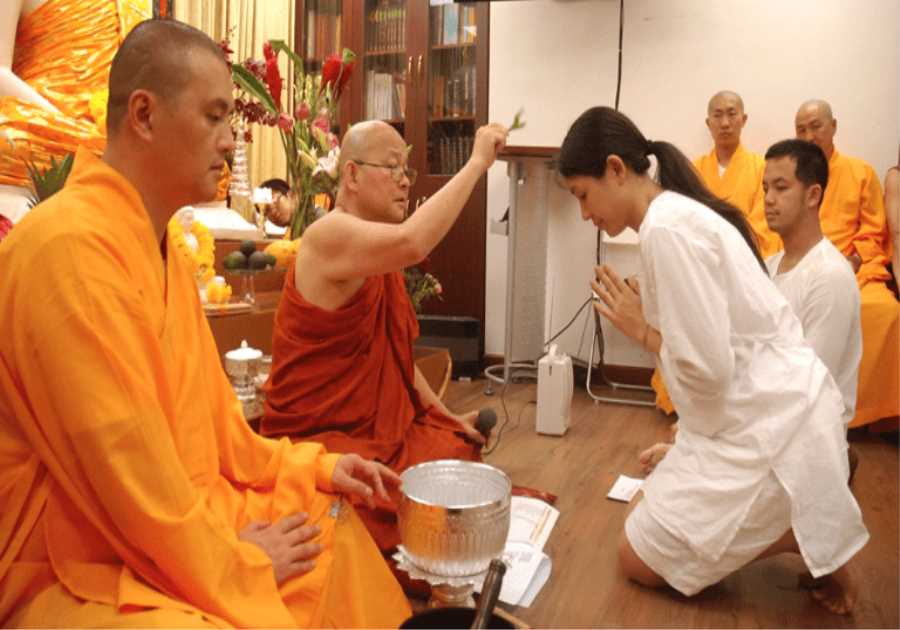